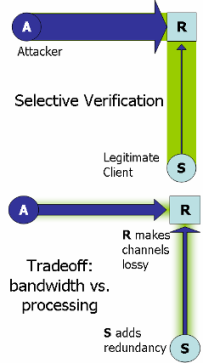 This project focuses on security measures to prevent unwanted traffic on networks. It explores ideas for models and countermeasures for the analysis and prevention of denial of service attacks. In particular it looks at the shared channel model in terms of simulations and theoretical estimates for attacker rates when routers are taken into account.

Tiered Incentives for Integrity Based Queuing
Fariba Khan and Carl A. Gunter
USENIX OSDI, Workshop on the Economics of Networks, Systems, and Computation (NetEcon ’10), Vancouver, BC, Canada, October 2010. [BIB]